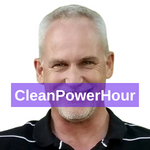 Get a 15% discount to attend Midwest Solar Expo with discount code: CPH15. www.MidwestSolarExpo.com/, the premier B2B solar and clean energy event in the region.

The downside of solar energy is that it cannot be generated at night.

But John King dreams of solar with an on-off switch. And he’s developed concentrating solar-thermal power (CSP) technology that facilitates the massive geological storage of thermal energy. Thermal energy that can be brought to the surface and used to generate power—any time of the day or night.

John is the CEO of Hyperlight Energy, a technology developer and manufacturer based in San Diego. The company's flagship product is Hylux, a disruptively low-cost CSP system.

John shares his vision of repurposing the 100,000 oil wells in California using geological thermal energy storage (GTES) and describes where in the US it makes sense to deploy Hyperlight’s CSP technology.

Listen in for John’s insight on converting combined heat and power (CHP) facilities into solar cogeneration plants and learn how we might make direct air capture a byproduct of a renewable power plant!

The advantages concentrating solar-thermal power has over photovoltaics

How the 100,000 oil wells in California might be repurposed using GTES (and how much energy that would produce)

How we might convert CHP facilities into solar cogeneration plants

The pros and cons of storing solar CSP heat above ground