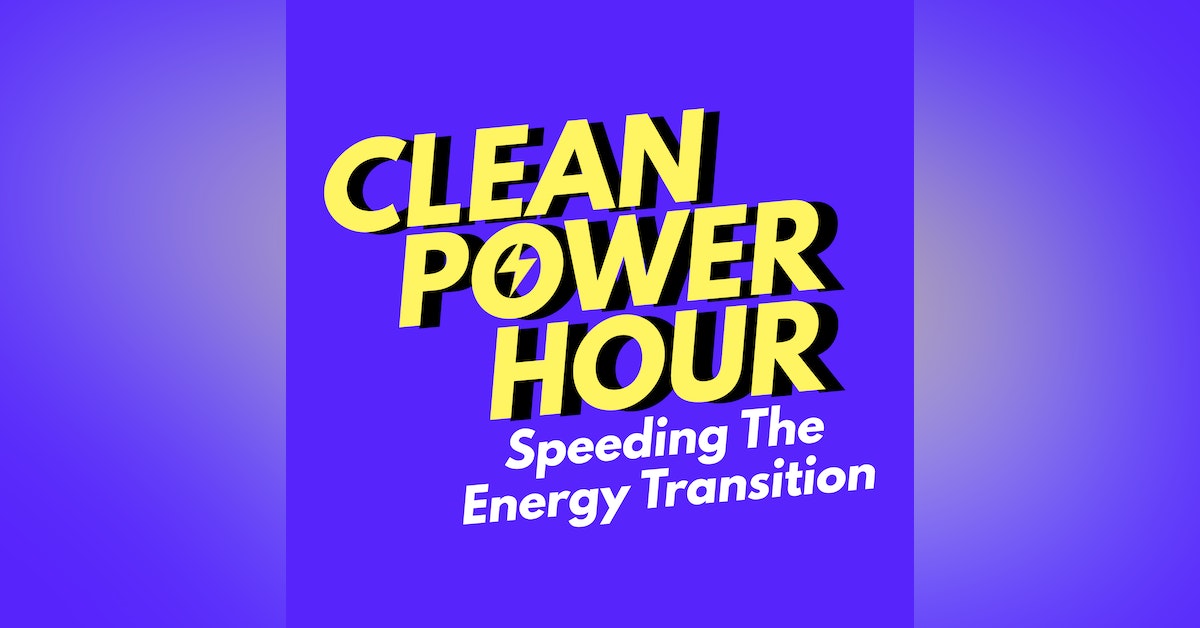 63: Today on the Clean Power Hour: Energy Dome! We kick off this episode with an interview with the founder and CEO of Energy Dome, Claudio Spadacini.

They are bringing long duration (10-24 hr) energy storage to life with the close of $11 million round of venture backing. The business has reached it's financial goals and are making huge changes to the way we treat solar power.

Wer're bringing you the latest in energy transition news: Solar is growing 40% year over a year!? Build Back Better; Stand Alone ITC for energy storage; extension of the solar ITC for 30 years; interconnection fee woes?; Fossil fuels are shrinking on the grid - the United States has built no net new fossil fuels since 2004; building wind power with refurbished turbines; Lookout for upcoming episodes: Ally Power - the hydrogen economy with Joe Alfred; IL Solar and Storage booming once again with Mark Pruitt, founding director of the IPA (IL Power Agency);

You take C02, store it in a large dome (think football stadium-sized) at atmospheric pressure. To charge the battery you use electricity (from wind, solar or other grid power) to compress the CO2 to a liquid in storage tanks. Then when you need power from the system you discharge the C02 into a turbine which produces electricity. It uses all off-the-shelf technologies. LCOS is competitive with other technologies and perhaps half that of Lithium Ion for a long duration. They are building a 2.5 MW (12 MWh) pilot facility (on a former power plant brownfield) in Italy that will come online in Q1 2022. And they have a contract for a 100 MWh project. The system scales in blocks of 25 MW (up to 200 MWh).

Since late 2004, no “net new” fossil fuels have been built in the United States. Additionally, we’ve seen clean electricity increase from 31% to greater than 41% from 2011 through 2020.
https://pv-magazine-usa.com/2021/12/02/a-cleaner-grid-arrives-as-renewables-replace-fossil-fuels/

Alaska Wind Farm has acquired the four refurbished Vestas V80 2MW wind turbines from Business In Wind. The turbines’ tower components are being transported from Belgium, where they have been operational for 10 years, to the Dorset site.
https://renews.biz/74075/dorset-wind-farm-secures-refurbished-turbines/

Exxon buys a bunch of ocean plots in the Gulf of Mexico, some suspect for a major carbon capture and sequestration play - be skeptical!
https://twitter.com/luke_EIG/status/1460988693561364483

Solar cell manufacturing in China is up 50% from last year - over the last 12 months, production volume is 227 GW. China ramping cell production is a good thing. We have a grid to green and an energy transition to fuel.
https://twitter.com/laurimyllyvirta/status/1466028127101104136

Battery packs of an electric bus - Bluebird buses are in the EV bus business; looking at some battery packs https://twitter.com/EVBlueBird/status/1456622553171042309

Battery pricing down again in 2021 so far, expected to increase a bit next year though, before resuming downward trajectory per BNEF (here is an article - but this tweet from BNEF head is better: https://twitter.com/JamesTFrith/status/1465644442732441604